Bioregulation Thermometry:
Breaking the Barrier to Open Algorithmic Fields in Diagnosis and Assessment of Casual Factors in Chronic Disease

Patients are recommended to start Regulation Thermography screenings at age 25 and increase in frequency of screens as they age.

"In nature we never see anything isolated, but everything in connection with something else which is before it, beside it, under it and over it."

Homeostasis is an ideal or virtual state of equilibrium in which all body systems are working and interacting in an appropriate way to fulfill all the needs of the person and/or the body. As disease possesses a characteristic redundancy of symptoms and direction of degenerative events, health possesses the characteristic ability for present-time creativity, adaptability and capacity to change. When homeostasis is interrupted (e.g. by a malfunctioning response to a stressor), the body cannot to restore itself by appropriate modulation of one or more physiological processes. The stress-adaption mechanism, called REGULATION, includes the activation of the primary force of the Hypothalamic- Pituitary-Adrenal Axis (HPA Axis) involving the autonomic nervous system and endocrine systems.

Severe stressors or long lasting adjustment demands with cumulative maladaptive compensation reactions can cause severe imbalances to this steady state, away from ‘ideal’ Regulative function. This has shown to cause not only psychological distress but also organic, terrain and functional disorders. Certain diseases and disease syndromes can be ‘seen’ by various technologies.
A slipped disk in the back is best visualized by an MRI. Factors that lead to breast cancer, diabetes, and heart disease to name a few, can best be seen by Regulation Thermometry (AlfaSight 9000), a cutting- edge method having its roots in German and European medicine.

The risk of getting breast cancer has tripled over the last half-century. For many women, breast cancer begins very early in life, long before they could have been educated about prevention strategies. One way we can beat breast cancer is through early detection, which translates into a much greater likelihood of a cure. For decades, breast self-examination and mammography have been touted as the screening techniques of choice. However, the recently revised federal guidelines for mammograms - waiting until age 50 to get the first one and then only getting one every two years - have caused many people to question the safety and efficacy of this technology (mammograms). Several recent studies do indicate that mammography could be doing more harm than good for women who are under age 50, who have dense breasts, and who have BRCA1/2 mutations (which increase vulnerability to the cancer- causing effects of ionizing radiation). As stated in a 2004 Radiation Research report, “The risks associated with mammography screening may be approximately five times higher than previously assumed.” Moreover, the physical pressure of mammography could rupture an existing tumor, thereby causing metastasis (spread).

Such risks are avoided entirely with the radiation-free, contact-free technology called dynamic digital breast and whole- body thermometry, or Regulation Thermometry. Similar to breast and body thermography, it works on the principle that health-disturbing factors involved in the genesis of tumors are measureable, as they alter normal behavior of organ responses to stressful stimuli. These health- disturbing factors start by changing neurological signals that control the temperature of the skin. We can therefore ‘see’ the organ and tissue aberrations by measuring the characteristic temperature changes transmitting through them, and connecting to the capillaries that control skin temperature.

The autonomic (involuntary) nervous system is merely a conduit for the expression of the deeper tissue and organ status. Each organ and tissue location is connected through its parallel cutaneous projection from the spinal nerves. This method is therefore a neurologically understood measurement rather than an acupuncture or alternatively- based method. The particular regional infrared emissions can be accurately measured to fractions of a degree using a specialized infrared sensor, displayed as a digital temperature and value. Our European method displays whole-body temperatures creating what is called a “Thermogram.” Dr. Arno Rost and Dr. Petra Blum, the major contributors to the original point locations and disorder ‘signatures’ created a background to this thermometric method.
Since older technologies had accuracy impairments as well as being very difficult to accurately interpret, a new sensor method has been created by integrating Infrared chip and window technology with circuits to assure continuous streaming calibration to a 0.1 degree C or more accuracy level.

REGULATION THERMOMETRY - IS DIFFERENT. WHY?

According to the latest studies, the most common infrared camera thermography was accurate in assessing breast cancer in 60% of the cases, whereby Dynamic Regulation Thermometry was accurate up to 93%, a method that utilizes a ‘Signature Recognition” formula that incorporates several body regions connected with the breast, as well as particular characteristics of the behavior of the points measured over time (Moghbel, M. et.al. J.Artif. Intel, 2011).

Cancer researchers observed in the 1960s that women with breast cancer showed an elevation of breast skin temperature of 1°C to 3°C in areas overlying malignant tumors. This led to the proposal that thermographic breast imaging could boost diagnostic accuracy, helping to identify patients with hidden tumors or those at risk for developing cancer. From the mid-1950s to the mid-1970s, it was widely believed that thermography would hold the key to breast cancer detection, but then a clinical study in 1977 found thermography to lag behind mammography. Because of this one study - which we now know had numerous flaws - the medical profession (and insurance companies) dismissed thermography and embraced mammography as the primary screening tool.

We now know, however, that an abnormal thermogram is at least ten times as important a risk indicator as family history of breast cancer, according to a 2001 report in the International Journal of Fertility and Women’s Medicine. In 2002, researchers offered the following conclusion in IEEE Engineering in Medicine and Biology: “Several studies have shown that infrared imaging [thermography] is a good, and perhaps the best method for risk assessment in breast cancer: the presence of an abnormal asymmetric infrared heat pattern of the breasts probably increases a woman’s risk of getting breast cancer at least ten-fold.”

EARLY DETECTION and UNCOVERING THE CAUSE

Breast thermography can help women detect a potentially cancerous process long before a breast tumor actually develops and becomes a threat (up to 5 years). With a normal thermogram, one can rule out breast cancer in the great majority of cases. The sensitivity of regulation thermometry appears to exceed that of other thermography and mammography methods in many ways.
First, Regulation Thermometry looks at the entire body’s BEHAVIOR after being stressed, and this gives a ‘living, dynamic view’ which is, if you can imagine, more ‘real’ than looking at the body as a non-moving, still piece of anatomy with no moving parts. In addition, a normal thermogram has a smaller chance of missing cancer when compared to a normal mammogram.

However, thermography does not necessarily replace mammography in that thermography is NOT a picture of the tissues or organs as is an X-Ray (mammogram) or say, a MRI. So, we often refer our patients to mammography if we see a suspicious region, organ or breast. On the other hand, although an abnormal thermogram could indicate cancer, it lacks the specificity to show whether cancer actually exists. This would require further testing, such as the use of ultrasound, MRI, and perhaps ultimately a tissue biopsy.

As noted in a 2009 review published in Integrative Cancer Therapies, “No single tool provides excellent predictability; however, a combination that incorporates thermography may boost both sensitivity and specificity.”

Epidemiologic research has found that thermography alone had an average sensitivity of 83 percent in detecting breast cancer versus 66 percent sensitivity for mammography; however, the combination of mammography and thermography had a 95 percent sensitivity for all breast types, whether fatty or dense. This combination is clearly the best strategy for women over 50, and, since more women will NOT receive mammograms before age 50, thermography fits the new niche for women from their 20’s the 40’s, as the breast cancer rates due to environmental toxins is increasing every 10 years. For these older women, breast thermography cannot replace mammography, as there are some tumors that do not generate much heat and maybe missed.

Thermography may also prove to be an excellent way to monitor women who have already been diagnosed with breast cancer. Breast cancer patients with abnormal thermograms have faster-growing tumors that are more likely to have metastasized, according to a report in the Annals of the New York Academy of Sciences. Therefore, for breast cancer survivors, thermography seems to make more sense than mammography as a way to ward off a recurrence far ahead of time.In Regulation Thermography, since the whole body is tested, and the breast is in reality connected with many systems including the lymphatic and endocrine systems, a whole-body measurement is absolutely the superlative method, and it can often discover the original causes of the cancer so those systems may be addressed concurrently.
With an abnormal thermogram, we often refer the patient to ultrasound in order to determine whether there is a cyst or tumor suspicion. We use several effective, non- invasive strategies to eliminate cysts and prevent future cysts from forming. If it’s a mass, then a biopsy may be indicated. If there is no cyst or mass, you can still adopt an anti-cancer nutrition and botanical program on a precautionary basis. 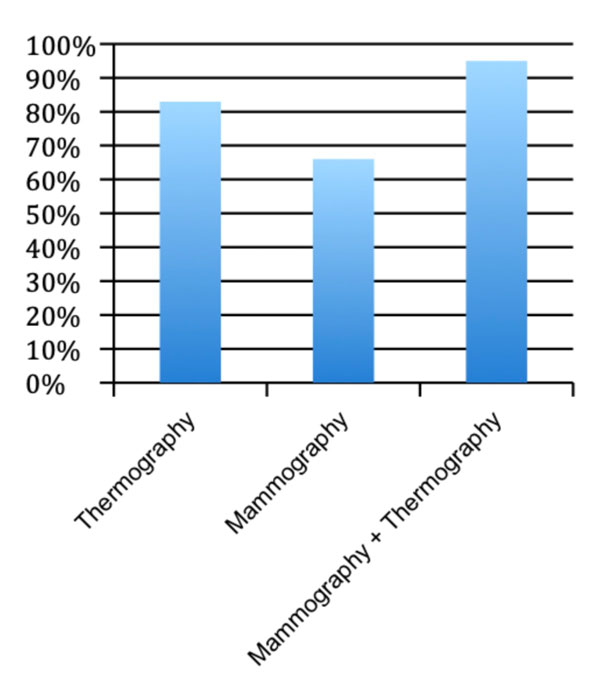 As you can see, thermography enables you to be highly proactive as well as interactive allowing us to work as a team to establish long-term breast health. It can help put a stop to the factors leading to a tumor before it becomes a reality, or to treat cancer at an early stage, when it is most curable.
With thermography, you can take steps to ward off a problem that would only be picked up much later by mammography. By using anti-cancer nutrition, herbal therapy, and other integrative medicine strategies, you can then turn this situation around and get your body back “in the clear.”

Cancer is comprised of three factors.

Two of them are ignored by conventional medicine. They are: a) Tumor itself (conventional medicine treats this; b) The internal tissue chemistry that lies vulnerable to facilitate a cancer growth, and c) the original trigger, whether it was a chemical exposure, a trauma emotional or physical, or other factors. If only a tumor would be removed, irradiated and/or chemotherapy was administered, nothing was ever done to remove the cause or build the inner chemistry to lessen vulnerability long term. This shows a lack of common sense within the conventional medical approach.

3. After age 50, continue thermography every six months with mammograms every two years.